1.  Know the main components of peripheral blood
2.  Be able to recognize all of the cellular components found in peripheral blood by light and electron microscopy.
3.  Know the approximate abundance of various types of blood cells.
4.  Understand the functions of major plasma proteins and of the different kinds of cells.
5.  Be familiar with the general process of hematopoiesis and discriminate between lymphoid and myeloid cell lineages.
6.  Describe the organization of the bone marrow.
7.  Be able to recognize megakaryocytes in the bone marrow and understand their function in platelet production.
Back to Top

Scan around the 63x and 86x slides at high magnification to see the various kinds of blood cells that were discussed in the lecture.  Most abundant, of course, are the red blood cells (RBCs) or erythrocytes, which are seen in large numbers everywhere you look.  In between the RBCs you should look for small, basophilic fragments which are platelets or thrombocytes View Image that are important in blood clotting.  As you continue viewing, you will see occasional white blood cells (leukocytes).  Some of the white blood cells may defy identification, often because the cells were damaged during slide preparation, so look for characteristic examples, and ignore the equivocal cells. Refer to the images in your texts and from the lecture and try to find an example of each leukocyte type using the 63x and 86x slides (there's less area to cover in these high-mag slides and the cells present are excellent, although the 63x slide does NOT contain any basophils).

The most common white blood cell is the neutrophil, which has a distinct multi-lobed nucleus (often 3-5 lobes).  Also frequently seen arelymphocytes, which are small cells (often as small as RBCs) with a dark nucleus and very little cytoplasm.  Another cell type is the monocyte, the largest of the blood cells.  It has a large, relatively pale nucleus, and rather clear cytoplasm (granules are usually less apparent than those in the illustration in Wheater atlas).  You will also see an occasional eosinophil, with prominent reddish granules filling the cytoplasm, and a nucleus with 2 (or sometimes 3) lobes.  The exact color of the granules may vary from slide to slide, depending on how well the slide was prepared.  In your particular slides they may be anywhere from bright red to dull brown.  The remaining cell type you may see on your slides is the basophil, which is hard to find, since it constitutes less than 1% of the leukocytes (the 86x slide actually has THREE excellent examples).  The cytoplasm contains large, irregular granules in a "grape-cluster" appearance that usually stain dark blue or almost black. Basophil nuclei may often appear somewhat oval-shaped, so, at first glance, they may be confused with lymphocytes. However, the presence of the large, dark-staining granules should help you distinguish them; also, remember that basophils are rare.

After you've done some looking on your own, here some quick links showing examples of each type of leukocyte (in order of their normal frequency in a blood smear). USE THESE LINKS ONLY AFTER HAVING TRIED TO FIND THESE CELL TYPES ON YOUR OWN!

The development of blood cells (hematopoiesis) takes place in the bone marrow found within the marrow cavity of bones.  In this course you will not be required to recognize the various stages of blood cell development in bone marrow slides.  However, you should have some idea of the process. Look within the marrow cavity of these slides and be sure you can see:

(1) Megakaryocytes, which are huge cells from which the platelets are formed by budding (a process only visible at the EM level).

(2) In the bone marrow in slide 48, look for marrow sinuses and cords View Image, which are expanded sinusoidal (discontinuous) capillaries characteristic of marrow.  When the developing blood cells in the cords are finally mature, they pass through the endothelium of these sinuses to reach the blood and are then carried out into the general circulation.  The sinuses can usually be recognized by the fact that they are full of mature RBCs, and therefore are seen as pink areas in the marrow. The cords contain immature blood cells and megakaryocytes. Remember also that clusters of mature granulocytes, particularly neutrophils and eosinophils may accumulate at the margins of the cords and will move into sinuses when needed, as in response to infection or inflammation.

The sinuses in slide 48 don't contain too many mature RBCs, so the sinuses and cords may be difficult to see. You may have better luck with slide 45 that you used to look at fibrocartilage in the intervetebral disc (the disc is in the middle of the section with two vertebral bodies on either side --the marrow is within the spongy bone of the vertebrae) View Image. Also, the UCSF collection (particularly slide 83 View Image) has some pretty good examples of marrow in which you should be able to find sinuses, cords, and megakaryocytes.

122 Blood Erythrocytes (RBC) View Virtual EM Slide
Erythrocytes (RBC). RBCs are cut in several planes of section in this micrograph. Why does the one sectioned in the equatorial plane appear to have a large hole in the middle? (BL1) Note that in contrast to the lymphocyte, neither the two platelets nor the RBCs contain nuclei. The plasma has a flocculent appearance, because the protein concentration is high and has been precipitated by the fixative.

139 Erythroblast nuclear extrusion View Virtual EM Slide
Erythroblast (nuclear extrusion). When the nucleus becomes extruded during maturation of an erythrocyte, the cell becomes a reticulocyte, which is a nearly mature erythrocyte. The reticulocytes are normally found in the bone marrow (except about 1%) and still have some cellular organelles, such as mitochondria, Golgi vesicles and polysomes. This gives the cytoplasm a basophilic character.

126 Neutrophil Human View Virtual EM Slide
Neutrophil. Remember the multi-lobed nucleus and the abundance of dense heterochromatin that you saw in the blood smear. The cytoplasm contains both azurophilic and specific granules. The distinction between these two granule populations is not very clear in this micrograph and you are not responsible for recognizing granule types.

130 Blood Eosinophil View Virtual EM Slide
Eosinophil. The bi-lobed nucleus, in combination with the specific granules that contain crystalloids, make it possible to identify this cell as an eosinophil.

Why does the one sectioned in the equatorial plane appear to have a large hole in the middle?

Red blood cells are biconcave, meaning that they are shaped like a donut with a thin covering over the hole (you get an idea of this by looking at the other RBCs in the picture). Unless it is sliced exactly in the middle, the edge will be in the plane of section, but the middle portion will either be above or below, leaving what looks like a hole in the center of the cell. 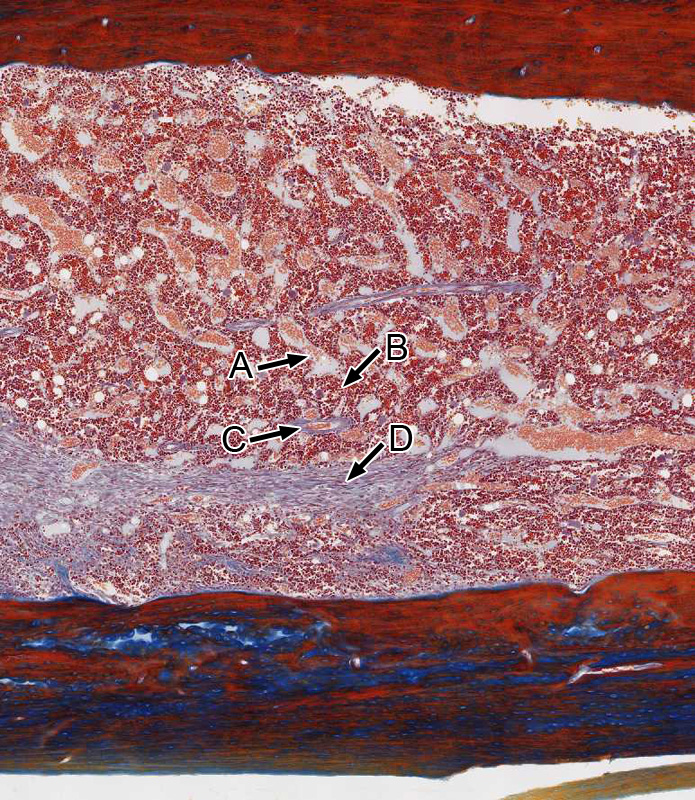 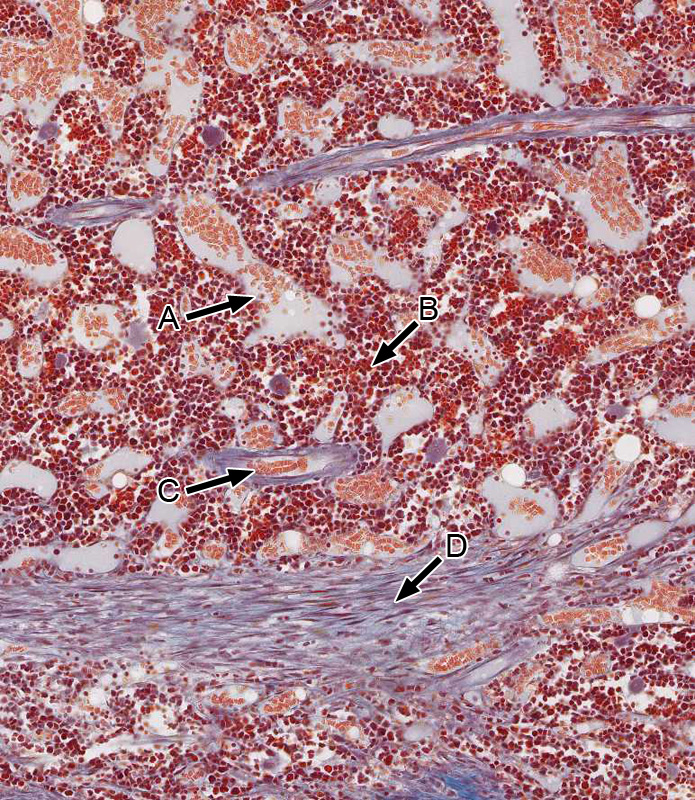 Correct answer A. Note the presence of erythrocytes in the bone marrow sinus.

2. Which statement(s) is/are true about the cell marked by the black arrow? 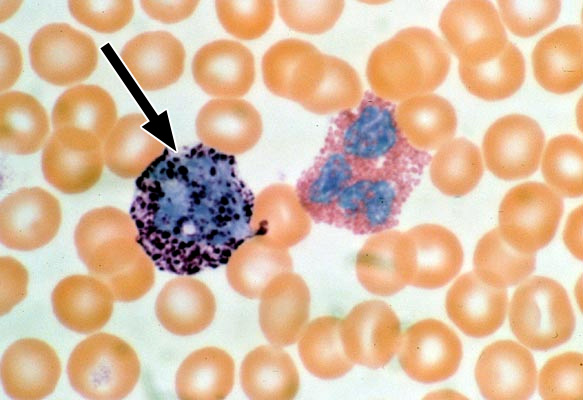 Correct answer 1. The cell indicated is a basophil, which comprises less than 1% of circulating leukocytes.

3. Which statement(s) is/are true about the histological structures indicated by the arrows. 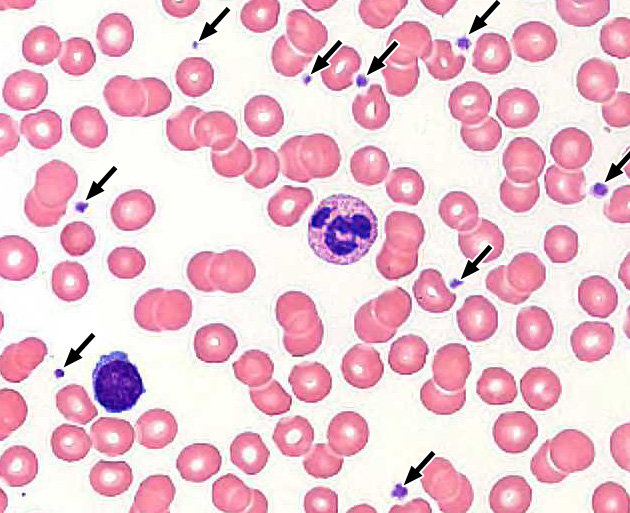 Correct answer 3. The structures marked by the arrows are platelets/thromocytes, which are derived from a myeloid progenitor cell.

4. Identify one of the primary functions of plasma albumin.

5. Which statement(s) is/are true about the cell marked by the black arrow in the transmission electron micrograph below? 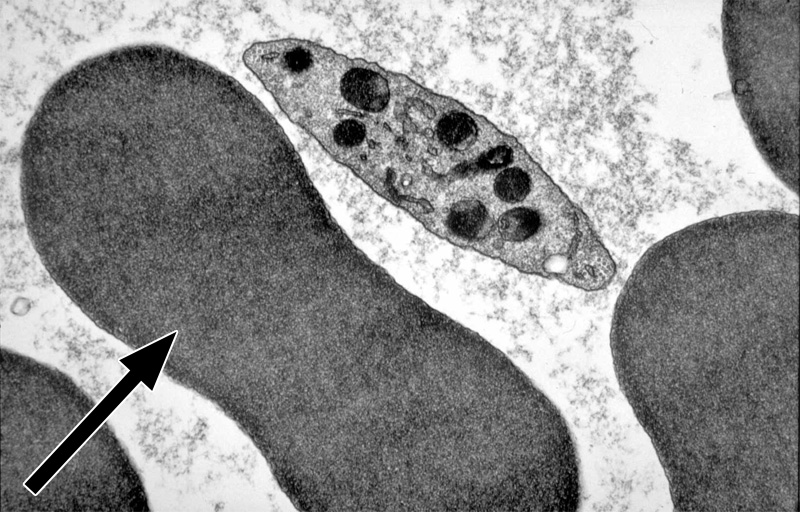 Correct answer 5. The cell is a mature erythrocytes/RBC which expresses ABO antigens that determine an individual's blood type.