The digital slides as well as the glass slides in your sets will show all of the cochlear structures. The vestibular structures will be present only in selected slides. The inner ear consists of a series of interconnecting sacs and tubes (the membranous labyrinth) suspended in cavities within the bone (the osseous or bony labyrinth).

Embedded within the petrous portion of the temporal bone is the bony labyrinth which consists of the central vestibule, three semicircular canals, which arise and end at the vestibule, and the cochlea. It contains a fluid called perilymph, which has a composition similar to extracellular fluids (high in Na+, low in K+).

The innervation of the cochlea and vestibule is as follows: The cell bodies of the cochlear neurons occupy a canal (the spiral canal) that spirals up the modiolus. This spiral aggregate of nerve cells is called the spiral (or cochlear) ganglion (see this Image for an orientation). Keep in mind that these are bipolar sensory neurons: their dendrites synapse with the hair cells in the organ of Corti (discussed below) and their axons come together in the cochlear nerve, which occupies a central canal in the modiolus and exits at the base of the cochlea. In the sensory regions of the vestibule, hair cells of the maculae and cristae (discussed below) synapse with dendrites of a corresponding aggregation of sensory neurons in the vestibular (or Scarpa's) ganglion (seen in #EAR-2 View Image, which then send their axons through the vestibular nerve. The processes of the vestibular nerve join with those of the cochlear nerve to form the vestibulocochlear nerve (cranial nerve VIII)Ear Image .

Other neuroanatomical features of interest found within this region of the temporal bone in slide EAR-1 include the stapedius muscle #EAR-1 View Image, which is a thin bundle of skeletal muscle (innervated by the facial nerve) attached to the base of the stapes to dampen its movement. Also present is the facial nerve (cranial nerve VII) and, if the plane of section happens to be at the genu of the facial nerve, neuron cell bodies of the geniculate ganglion #EAR-1 View Image.
What is the function of the geniculate ganglion?

The EAR-1 slide also shows some CNS tissue in the cranial vault #EAR-1 View Image; see if you can identify this organ.

Cerebellum --you should be able to identify the molecular layer, granular layer, and the very large Purkinje cells.

The membranous labyrinth consists of the interconnected utricle, saccule, three semicircular ducts, the endolymphatic duct and sac, and the cochlear duct. It contains a fluid, endolymph, much like intracellular fluid in composition (high K+, low Na+). You will not have difficulty recognizing the cochlear duct (scala media).

1. The utricle and the saccule contain the otolith organs that lie within the bony vestibule bony vestibule Image . These otolith organs consist of sensory areas called maculae , and you should note that they are oriented somewhat perpendicular to each other to be able detect movement in different planes. Taking a closer look at a macula (a really nice macula of the utricle is visible in #EAR-2 View Image, you should be able to identify the sensory epithelium comprised of hair cells and supporting cells (these can't be differentiated in the light microscope, but you should know the functions of each). It is overlaid by a gelatinous material (otolithic membrane) in which are embedded calcite crystals (otoliths or otoconia). The otoconia are quite visible in some slides, hardly visible in others. Beneath the sensory epithelium is a delicate connective tissue (filled with perilymph) and nerve fibers from the bipolar neurons of the vestibular (Scarpa's) ganglion. Note: you DO NOT need to be able to tell the macula of the utricle from the macula of the saccule, but you should be able to identify them as maculae in general and recall that maculae detect linear acceleration.

2. The semicircular ducts have dilations (ampullae) near their origins from the utricle. Each ampulla has a ridge of tissue, or crista ampullaris, (best seen in #EAR-2 View Image) that projects into the lumen. The crista has a sensory epithelium similar to that of the macula; recall, however, that the cristae are specialized to detect angular (or rotational) acceleration. The hairs of the hair cells project into a gelatinous material called the cupula. The cupula projects into the lumen more than the otolithic membrane of the macula, and lacks otoconia.

What would happen if any otoconia or other debris were to become lodged somewhere in a semicircular canal or in a cupula? Answer

Note that the "membrane" of the membranous labyrinth is suspended from the bone by a delicate connective tissue and that in the Ear-1 and Ear-2 slides this tissue has torn such that the membrane is now squished up against the crista, so there's not much of the cupula that can be seen Image.

3. The cochlear duct or scala media #EAR-1 View Image contains the organ of Corti, which detects sound (hearing). The cochlear duct is a triangular tube that is suspended in the middle of the spiraling bony labyrinth of the cochlea, thus subdividing this space into three spiraling sub-compartments, or “scalae”: the scala vestibuli, which opens on the vestibule; the scala media; and the scala tympani, which ends at the round window (the round window is not seen in any your slides). The scala vestibuli and scala tympani are both elements of the bony labyrinth and contain perilymph; the scala media or cochlear duct is an element of the membranous labyrinth and contains endolymph.

A few notes about deafness: Disruption of any part of the process by which sound waves are transduced into input into the auditory portion of the CNS will result in "deafness." Damage to the eardrum or ossicles results in so-called "conduction" deafness whereby sound waves are no longer transmitted into the inner ear. In this instance, a patient would NOT be able to hear a tuning fork held near the pinna, and the loss of hearing would extend across the entire range of frequencies. However, placing the stem of the fork on a bony part of the skull (e.g. the mastoid process) would then transmit vibrations directly to the inner ear (via the bone) where they could then be "heard."

Loss of components within the cochlea results in sensorineural deafness which is more frequency-specific (i.e. the patient will not be able to hear specific pitches depending on the location of the damage in the cochlea). Loss of OUTER HAIR CELLS in a particular region of the cochlea would result in a "threshold shift" whereby sound of a particular frequency could still be detected (because the inner hair cells are still intact), but it would have to be LOUDER to make up for the fact that there are no outer hair cells to help stimulate the inner hair cells. This type of hearing loss can be compensated by a hearing aid.

Loss of INNER HAIR CELLS in a particular region of the cochlea would result in an almost complete inability to detect specific frequencies regardless of how loud they are. Loss of SPIRAL GANGLION CELLS would have a similar effect since these are the cells that actually project into the CNS. In both cases, the deafness could only be corrected with a cochlear implant.

337 Organ of Corti View Virtual EM Slide
Note the position of inner and outer hair cells in the Organ of Corti. Also know, which spaces are filled with perilymph and with endolymph, respectively.

What is the function of the geniculate ganglion?

Notice that the width of the basilar membrane changes such that it is shorter at the base and longer toward the apex of the cochlea. What is the significance of this change in length?

Compare the innervation and function of the inner vs. outer hair cells.

1. Which letter in in a semicircular canal?

Correct answer 4. (D). Note the clearly visible ampulla. A and B indicate otolith organs (B is probably the macula whereas A is probably the saccule, but remember that you are not expected to differentiate between the two). C is in the perilymph-filled space of the vestibule.

2. Which statement about the structure indicated by the arrows in the left panel and shown at a higher magnification in the right panel is correct? 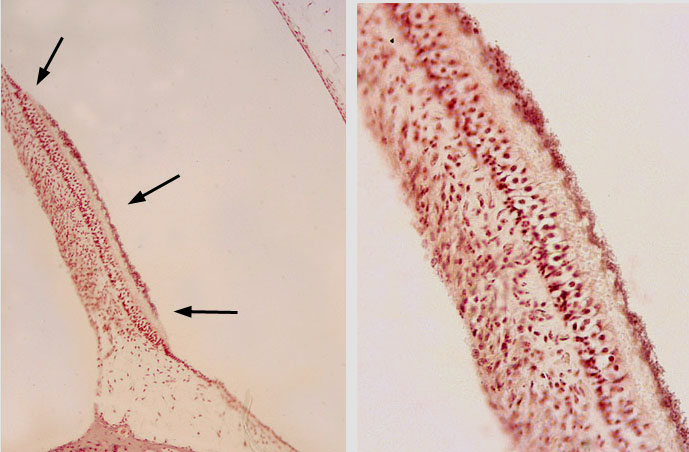 Correct answer 3. The marked structure is a macula or otolith organ (note the otoliths) which detects linear acceleration.

3. The cells marked by the red arrow form synaptic contacts with which of the following cells?

4. Which statement(s) about perilymph is/are correct?

Correct answer 5. ALL of the above statements are correct.